Essentially, this little book is a commentary on a statement made by theologian R.C. Sproul. It serves somewhat as a guide for scientists and theologians to come to terms when disagreements arise. The basic argument of the book is as follows:

1. All truth is God’s truth. 2. God reveals truth in two ways – General Revelation (nature/science) and Special Revelation (Word of God). 3. Both General and Special Revelation are infallible, however, they are both subject at times to fallible interpretations. 4. If a conflict between science and the Bible arises, it can only be one of three things – the scientist holds a flawed interpretation of his data, the theologian holds a flawed interpretation of Scripture, or both are wrong. Mathison reminds the reader of the historical view of geocentrism and that many theologians (Calvin and Luther specifically) clung to a flawed interpretation of Scripture despite Copernicus proving them wrong. As such, it is possible for science, while interpreting infallible general revelation, to inform and educate the theologian. This point is made to argue for a generous relationship between science and theology. Too often, theologians assume the scientist is wrong while the scientist assumes the theologian is wrong – in reality, both scenarios are possible. The author does remind the reader that in cases where science seems to directly contradict God’s Word, it is God’s Word that gets the nod. However, the theologian must be sure of his interpretation before taking a stand. I would have rated this little book higher had the author applied its principles to the arguments concerning evolution. Rather, Mathison applies his principals to the age of the universe. It was interesting, but it left me wanting more. It does, however, serve as a decent introduction to the subject of science and religion.

While watching this debate between pundit Bill O’Reilly and atheist Richard Dawkins, something within me snapped. I suddenly grew very tired of the entire religion versus science debate. Rarely is anything ever accomplished when these two sides clash; both have dug in their heels and are unwilling to budge. At this point, the entire dialogue has been reduced into a bunch of blustering sound bytes.

Perhaps my perspective is a little skewed. I’m in favor of both Christ and science. Obviously, I am a Christian. I believe that the Bible is inspired and fully confess a belief in the Father, Son, and Holy Spirit. I am also a fan of science. Perhaps due to all the episodes of Star Trek I’ve watched in my life I am a huge proponent of space travel. I can get lost for hours looking at the images of space that NASA provides on their website. Also, I lost a mother to cancer and have a child with type one diabetes and a step son with epilepsy, so I get a little jazzed up anytime the news reports that scientists are one step closer to curing these and other diseases. Simply put, science is cool.

I do not believe; however, that science and faith-based religions are at odds.

I think atheists are out of line when they suggest that faith should play no part in science; rather, I feel that faith should be the driving force behind science. Let me explain. To be human is to be curious. The human race is born with an innate desire to explore and learn. We are programmed to ask really big questions. This programming, much like our innate moral code, comes from somewhere beyond ourselves; I would suggest the possibility that it comes from God. Dawkins and his kind suggest we should stop short of asking the really big questions. It is okay to ask how the human machine works or how it came to be what it is, but the second we ask “who” put the machine in motion, atheists slam on the brakes and tell us we’ve gone too far. I’m sorry, but if science is unwilling to even entertain the big questions, I want new scientists.

For example, when I look at a great piece of art, I can study its lines, shape, and composition for awhile, but eventually I’m going to want to know who painted it. To become truly intimate with a piece of music, you must eventually come to know the composer. Who was she? What type of mood was she in when she wrote it? Of what culture did she belong? Without asking these questions, we might as well examine art with our eyes half shut.

In all honesty, I don’t expect science to answer all of the big questions. Along with our innate curiosity, we are also born with a certain uncertainty about life after death and God. Christ has eased many of these fears for me, but I would be lying if I told you all my questions have been answered. It might be a little idealistic to believe that science can answer all of these questions; however, it is inspiring to know that every time there is a scientific breakthrough, we are one step closer to understanding our creator. I believe science has a high purpose that is encouraged by God. Scientific proof may not be required to believe in God, but if God is real, He can teach us and speak to us in a variety of ways including the Bible, His creation, and science.

It might surprise you to know that students in the United States currently rank 29th amongst other developed countries in science education. Atheists tell us we shouldn’t allow the big questions that concern creation in the classroom. Perhaps if we were able to ask those big questions and hint at the possibility of a God, our children would be inspired to accomplish more. 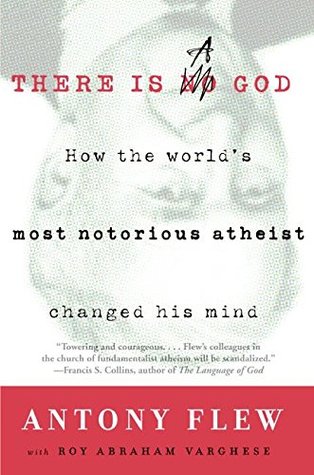 Book Review: There is a God by Antony Flew
Publisher: Harper Collins, 2008
Rating: 8 out of 10

The subtitle of this book bills author Antony Flew as the “World’s Most Notorious Atheist.” I wondered as I stumbled upon this title at my local library if this was an overstatement designed to sell books or if Mr. Flew was indeed well known amongst atheists. I will admit that I had never heard of him prior to this reading. A quick google search managed to convince me that the author was, in fact, well known.

Flew certainly has good academic credentials. He has taught Philosophy at several universities throughout England, Canada, and the US for decades. I was most impressed that Flew actually attended C.S. Lewis’ Socrates Club and debated (as an atheist) with Lewis’ students. In fact, it is the Socratic dictum that one should, “follow the argument wherever it should lead” that led Flew to his current belief in deism.

Apparently, although it was lost on me, Flew was criticized harshly in the blog-world when he renounced his atheistic views. Well-known atheists such as Richard Dawkins pronounced that Flew’s change of opinion was a “death-bed” conversion. The eighty year-old Flew refutes that suggestion emphatically and relates that he has never felt the presence of God, witnessed a miracle, or felt the need to have a personal relationship with a God. Flew insists that that his conversion was one of reason. Flew’s suggestion that his decision was based on his mind rather than his heart really appeals to me. It is hard to explain to a non-believer matters of the heart … so Flew’s assertion that he can explain to them matters of his mind could quite possible sway non-believers in a way other arguments couldn’t.

Flew’s position is that modern science points to the existence of God. He cites the following reasons; nature obeys laws, that life is intelligently organized and purpose-driven (and arose from matter), and the very existence of the universe (nature). Flew continues to expound upon his arguments and explains that his opinions are derived from both science and philosophy.

The question that floated around in my mind as I read Flew’s book was, “What God does he believe in?” My first thought was that it did him no good to believe in God if he believed in the wrong one! Flew explains that the God he believes in is the God of Aristotle. One that possesses the following attributes; “immutability, immateriality, omnipotence, omniscience, oneness or indivisibility, perfect goodness and necessary existence.” While not quite a Christian, Flew does explain that in his opinion the God who best fits this description of “Aristotle’s God” is the Judeo-Christian God.

I have softened my first thoughts (that is did him no good to believe in the wrong God) concerning Flew. Perhaps some people need to believe in stages. In retrospect, I think that’s how I did it. First, I decided there was a God. Later on I came to realize the God I believed in was the Judeo-Christian one and more specifically that I believed in Christ. Flew is taking his steps much in the same way as I did.

This book includes an impressive appendix written by Bishop N.T. Wright
in response to two questions asked by Flew. Wright defends the historical evidence for Jesus and defends the accuracy of the resurrection. I really enjoyed Wright’s comments.