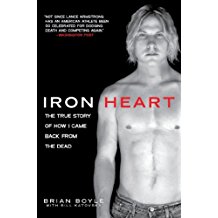 Brian Boyle should of been dead. After a collision with a dump truck – you read that right, dump truck, he was left with multiple injuries and placed in a medically induced coma while a team of surgeons attempted to put his body back together.  He was in such bad shape that every internal organ was in the wrong place. If it wasn’t for his athleticism and good health before the accident, Boyle certainly would have died. A college level swimmer before the accident, he was left learning how to walk. His story of slowly coming out of coma and being aware of his surroundings, but not being able to communicate or even move gripped me and drew me in. I found myself rooting for him at every step of the way.

Boyle’s story is a success story that culminates in the Kona Ironman Championships. The remarkable part of his story, however, is the support he had along the way. From his parents to the team of doctors and therapists that managed to put him back together; it took a team to get him to Kona.

I love stories of people who beat the odds to accomplish greats feats and Boyle’s story certainly qualifies. He was remarkably close to death and eventually began to thrive. This book was a great read. Find a church family that understands your shortcomings and treats you with grace and humor. #RealJoy!
Amen. #runforgod #slowrunnersclub #clydesdalerunner #Run50
8 miles in the books today. Would have loved to get a shot of Stef, but honestly, she’s too fast. I also failed to get a shot of the amazing, giant red-headed woodpecker I saw near the top of the one big hill on today’s route. Trust me, he made the climb worth it. It was actually only the second time I’ve climbed all of Larrick Hill, but I’m claiming the PR on Strava anyway! #runforgod #slowrunnersclub #clydesdalerunner #runohio #Run50 #relentlessforwardprogress