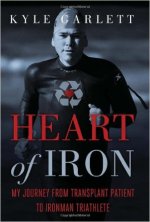 I started reading this book expecting an inspirational story wrapped in the context of training for triathlons and, if I’m being honest, I got much more than expected. Kyle Garlett is a cancer survivor. His story details his first discovery of lymphoma as a high school student and the prolonged battle that followed. In spite of his battle with reoccurring cancer, Garlett managed to get a college degree and build a career for himself in sports television. I was over a hundred pages in when I realized there had been no mention of triathlons – instead, I found myself engaged in Garlett’s battle. I found myself rooting for him and stunned by the battle he fought. This story will certainly impress upon you the battle that cancer represents and you will learn to appreciate those who have fought that battle.

Garlett’s battle eventually led to a heart transplant. The treatment he received for cancer destroyed his own heart and necessitated a new one. Not only did Garlett fight that battle, he recovered. And yes, his story does eventually lead to competing in triathlons. His spirit to not only survive, but thrive, is one we can all learn from.

I highly recommend this book.