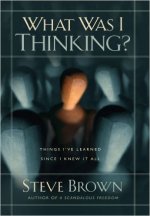 I’m currently reading a book by Steve Brown titles What Was I Thinking? Things I’ve Learned Since I Knew It All. Brown’s books are wonderful. Like me, he is a conservative Christian who believes in the inspiration of Scripture. Doctrinally, I think we are fairly similar. Yet, his writing takes you to new levels of reflection. The first time I read anything by Brown I remember thinking to myself that he was either a heretic or a genius – and it took me a while to figure out which. I’ve settled on genius. Brown writes in a way that is provocative. It’s like he is intentionally picking on the scabs conservative Christians walk around with. What he says makes you angry until you slowly start to realize it’s not Brown that is angering you, but rather God’s Word. And faced with that realization, there is nothing left to do but repent.

Basically, Brown makes me think. I’m sure some people find him annoying – some may have even settled on heretical – but I appreciate him. Here’s a quote from What Was I Thinking? that I currently can’t get out of my mind:

It’s that’s first sentence that has stuck with me … “Our [Christians] gift to the world is not one of anger, judgment, or condemnation.” Too often, that’s the face we present to world around us – anger, judgment, and condemnation. When, in reality, the Church should be an extension of God’s gift to the world – grace, mercy, and salvation through His Son.

Brown makes the further point that because of our anger and disgust with the world around us, Christians often retreat to the Church. We take safe haven in our churches and our Christian subculture because we are convinced that’s where the Holy Spirit is. We do it because it makes us feel safe yet our safety comes at the expense of the culture around us. We create a divide between the sacred and the secular and then refuse to cross it for fear of sacrificing our own righteousness. But it’s important to understand that this divide is man made. From God’s perspective there is no “secular”. The gospel of John makes that clear:

All things came into being through Him. It’s this fact that gives God the authority to speak into the hearts of every man and into the core of every situation. It’s that fact that gives Jesus the authority to forgive our sins. It’s that fact that gives God the right to determine that salvation must be accomplished according to His plan rather than our own. It’s that fact that is the foundation of grace. And when we retreat in disgust from the world around us and take refuge in our Christian subculture we are failing to take that gift of grace to the very people that need it the most. Jesus understood this. That’s why He hung out with sinners. That’s why He said,“It is not those who are healthy who need a physician, but those who are sick; I did not come to call the righteous, but sinners” (Mark 2:17). Even the Great Commission, our marching orders from Christ, instruct us to take His message of grace to the world, “All authority has been given to Me in heaven and on earth. 19 Go therefore and make disciples of all the nations, baptizing them in the name of the Father and the Son and the Holy Spirit, 20 teaching them to observe all that I commanded you; and lo, I am with you always, even to the end of the age” (Matthew 28:18-20).

When Christian present nothing to the world but anger, judgment, and condemnation and then retreat back to the safety of our own Christian subculture, we are forfeiting the one gift we have to give the world. It is imperative that Christians refuse to forfeit our input and voice to the culture we live in. Music, arts, literature, science … all of these things stand to benefit from the input of Christians.

Christ’s prayer should be the strategy of the Church. Rather than withdrawing from the world and drawing imaginary lines between the secular and the sacred, we should engage the world. We should deliver Christ’s gospel to the sic and refuse to sacrifice our voice while tending to our own safety.